The Tales of Beedle the Bard by J. K. Rowling 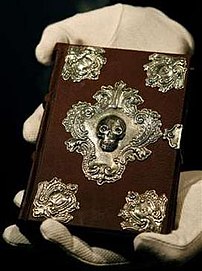 I will admit that I got suckered into buying the The Tales of Beedle the Bard by J. K. Rowling.Â  I wasn’t all that tempted to buy it at first.Â  But then I saw it at the grocery store of all places and heavily discounted.Â  I then rationalized that I should have it with the rest of the series and who knows it might be interesting, right?

Wrong. Maybe the book is interesting to young Harry Potter enthusiasts, but this adult found the book to be boring and completely devoid of the personality of the series as a whole.

If you don’t know exactly what the book is, let us turn to Wikipedia.Â  First, its origins in the series:

The Tales of Beedle the Bard first appeared as a fictional book, used as a plot device, in J. K. Rowling’s 2007 Harry Potter and the Deathly Hallows, the seventh and final novel of the Harry Potter series. The book is bequeathed to Hermione Granger by Albus Dumbledore, headmaster of the Hogwarts School of Witchcraft and Wizardry. It is described as a popular collection of Wizarding children’s fairy tales, so that while Ron Weasley is familiar with the stories, Harry Potter and Hermione Granger had not previously heard them due to their non-magical upbringing.

Then how it became a book of its own:

The Tales of Beedle the Bard is a book of children’s stories by British author J. K. Rowling. It purports to be the storybook of the same name mentioned in Harry Potter and the Deathly Hallows, the last book of the Harry Potter series.

The book was originally produced in a limited edition of only seven copies, each handwritten and illustrated by J. K. Rowling. One of them was offered for auction in late 2007 and was expected to sell for Â£50,000 ($103,000); ultimately it was bought for Â£1.95 million ($3.98 million) by Amazon.com, making the selling price the highest achieved at auction for a modern literary manuscript. The money earned at the auction of the book was donated to The Children’s Voice charity campaign.

All well and good I suppose.Â  Friends thanks and money for charity raised.Â  But the book itself – the stories and commentary – just are not very interesting.Â  They seem the kind of thing that might have been useful as an appendix rather than a stand alone book.

The stories themselves are only interesting so far as they are a sort of fairy tale gloss on the wizarding world of HP; sort of The Brothers Grimm for Hogwarts.Â  I am a big fan of fairy tales and myths but I found the Tales of the Beedle Bard rather flat.Â  They just don’t have the charge that the best of these type of stories do.Â  They seem rather like run of the mill children’s stories weekly connected to witches and wizards.Â  Like Hallmark cards turned into fairy tales.

And the commentary by Rowling and Dumbledore added nothing of interest.Â  Rowling added her own sort of political commentary in the footnotes and Dumbledore’s notes are bland and uninteresting.Â  One comes away with the feeling that someone as smart and talented as Dumbledore could not have written down such unimmaginative notes.

The whole thing strikes me as a marketing ploy to raise money for charity.Â  I suppose that is better than a lame stunt to simply make money, but it still feels like a waste.

Again, maybe young children feel differently but the disconnect between the series and this book is vast.Â  I hope Rowling sticks to her word and leaves Harry Potter alone.Â  If this book is any indication, any further work will only harm her reputation.