For some odd reason my kids love to visit Barnes & Noble. They love to hang out on the stage in the children’s section or play with the train set. My son in particular likes two story stores but that is just because he loves to ride on escalators.

The problem with this is that it only leads to trouble on my part (as if I don’t already have a book problem, right?). And it can be frustrating too. Standing there in the Children’s/Young Adult section one is tempted by the ever more creative and interesting books that are out there for young people. And the kids always beg to stay longer.

It was on one such trip that I noticed Wild Magic by Cat Weatherill on an end-cap and made a note to put it on the wish list. Due to financial constraints that we – like so many – are feeling I avoided the temptation to buy it and instead checked it out from the library (sorry B&N, publishers & authors).

Having read it, however, I can cheerfully suggest you purchase it should you have the necessary discretionary funds to do so (yikes, starting to sound like a lawyer here). It is a creative and intelligent mix of myth, mystery and coming of age stories.

Here is the publishers blurb:

The Pied Piper had his reasons for enchanting the children of Hamelin and stealing them away—ones rooted in a deep history of wild magic. Mari and her brother Jakob are among the children who followed the piper’s song, and they are now trapped in a beautiful but cruel world inhabited by a horrid Beast. They must remain there until he finds the right child, the chosen one, who can lift his century old curse. But the price of breaking the curse is a terrible one. This fast-paced, richly fantastical continuation of a familiar tale is a powerful story of a family torn apart by tragedy, and the magical adventure that heals them.

More of my take below.

Having just read an “adult” – albeit comic inspired – take on the Pied Piper it seemed like a good time to read a YA approach. And Weatherill does a great job tweaking the old myth and adding some great elements to it.

In this twist, as noted, the Pied Piper leads the children of Hamelin away not to their death but to a magical place called Elvendale. The Piper did this because of an ancient curse and promise of how that curse might be ended.

The children are tragically caught up in his quest to find relief from the burden and punished when the initial plan fails. It is Jakob, despite his deformed legs, that is the child he seeks but it is those very deformed legs that prevent Jakob from getting to the gate and into Elvendale and able to break the curse. The children pay for the Piper’s anger.

When Jakob goes searching for his sister, however, he manages to find a way in. And in seeking his son their father Moller soon joins the children in the magical land. All three become bound up in Piper’s search for an end to the curse.

While the hook for this story is the classic tale of the Pied Piper the real meat of the story centers on family and the choices we make. 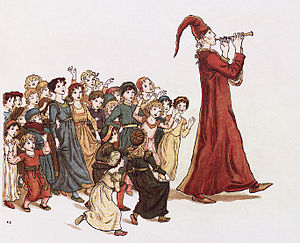 The Piper’s story is one of regret after one very foolish choice that had life changing repercussions. Weatherill creates a fascinating back story that explains how the Piper came to be leading all those children from Hamelin.

The basic ingredients are there: the flute, the rats, the town, the children, etc. But the why is different.

And this why makes the Piper an interesting character. Isolated from his family and burdened with a tragic secret he seeks relief wherever he can find it and is willing to do anything to break the ancient curse. What he wants more than anything is to be able to return to his family and his people.

In this way he becomes something more than a villain and more like the people you find in Irish folklore; friendly and playful in many ways but also very dangerous and untrustworthy.

The other family is Marianna, Jakob and Moller. Troubled by their father’s turn to alcoholism and anger after his wife’s death, the children dream of a paradise where these troubles don’t exist. But the Piper’s enchantment brings them not paradise but entrapment.  But as is often the case circumstances force them to work together if they are to survive.

And it is in these family dynamics that the story become deeper than just a magical adventure. Each member of the family must decide what is really important to them; must move past failures and weaknesses and seek to keep the promises they made (to others and to themselves).

Jakob turns out to have the most magical powers but each of them plays a part in their eventual triumph. And in doing so they remember why their family is so special and why being together is really all they wanted. When given the choice they choose “normal” rather than magical (albeit with a little help from magic).

Some critics complained about the different points of view and the lack of a systematic magic or worldview for Elvendale. But I don’t think it was that kind of story. Weatherill is more C. S. Lewis than J.R.R. Tolkien in that she uses pieces and parts from a variety of mythologies (and adds her own) to tell a story rather than building a world or alternate universe. And she also cleary brings a oral storytelling tradition to her writing.

I found the different perspectives interesting and enjoyed the way Weatherill weaved it all together. The result was an enchanting and entertaining reworking of the Pied Piper with one family at the heart of the story.

So if you find yourself hanging out in the local book store or library check it out. You will be glad you did.