If you had to pick a weekend to discuss football you would be hard pressed to find better one that this one. We are coming to the end of college bowl season and tomorrow will see the last spots filled for the NFL playoffs.  This is a season of either great joy or great sorrow for most fans (a few are saddled with a lingering depression as their teams suffers in the cellar out of reach of bowl games or playoffs).

For those that love the game and not just their chose teams this is a great time of year; full of days on end of football.  But with this enjoyment comes the bittersweet recognition that the season is coming to a close – there are only so many games left and then the dreaded off-season.

If you are a football fan there is a resource that might help you get through the off-season and come out even more knowledgeable about the game you love. Football: An Encyclopedia of Popular Culture edited by Edward J. Rielly is a treasure trove of information for fans and history/culture lovers alike:

Football. Far more than a game, America’s favorite spectator sport is an intrinsic part of the nation’s popular culture—a proving ground for high school athletes, a springboard for stars, a multimillion-dollar business, and a vast entertainment enterprise. Football: An Encyclopedia of Popular Culture provides a detailed look at America’s pastime through the lens of pop culture, a fascinating A-to-Z inventory of how certain aspects of the game affect and reflect broader society.
From African Americans in football to the meaning of Zero in the sport, this volume profiles players and personalities, teams and events, games and football concepts, and sociological and technological changes in the sport. The goal is not to name every Hall of Famer or to retell the game’s entire history, but to give a clear and detailed account of where, in football history, the importance of people and events extends beyond the playing field. Its wide-ranging entries examine such names as Joe Montana and Byron “Whizzer” White and phenomena from concussions, mascots, team names, and literature to U.S. presidents and football’s presence in television commercials. The encyclopedia covers all levels of play—professional, collegiate, high school, and youth—offering a from-the-ground-up, gridiron look at the game of football within the matrix of American culture.

More after the jump. 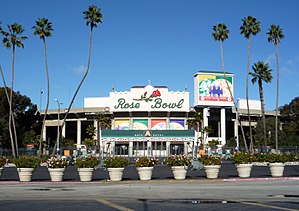 Just to give you an example, I looked up “Bowl Games” and spent an enjoyable few minutes reading about the history of college bowl games. I learned things I didn’t know about the early history of the Tournament of Roses which eventually featured a game in a new bowl shaped stadium and thus led to the Rose Bowl and the the term Bowl Games.

After that I kept on reading as the very next entry was Bradshaw, Terry Paxton (b. 1948) and being a huge Pittsburgh Steelers fan I wanted to read about the winner of four of their six Super Bowls.

Another Super Bowl QB, and Michigan alum, was next with Brady, Thomas Edward, Jr. (b 1977) and so I kept on reading about his exploits. Along the way you learn about the controversial tuck rule and Brady’s time in the spotlight thanks to off field issues.

Also as a Steeler fan, I am approaching this weekend with much trepidation. The defending Super Bowl champions are in danger of not making the playoffs. Thanks to an ugly five game slide to team like the Kansas City Chiefs, Oaklnad Raiders, and Cleveland Browns the Steelers need to win Sunday and have help. This is increasingly unlikely as many of the teams they need to win will have nothing significant to play for having wrapped up a spot in the playoffs.

The Steelers are seeking to grab one of the two remaining “Wild Card” spots. And if you look this up, you will learn what the term means but also that five Wild Card teams have gone on to win the Super Bowl (including the Steelers in 2005). This is what give players and fans hope: just get in and who knows what can happen.

In just a few minutes of browsing and reading I learned things I hadn’t know and was reminded of things I had forgotten. Football: An Encyclopedia of Popular Culture is a great resource for football fans or those interested in the intersection of popular culture and the game. It would also be a handy reference guide for those who would like to learn more about the game and its history.

I am sure I will be spending more time reading it as the dark night of the soul know as the football off-season approaches.