Atalanta and the Arcadian Beast by Jane Yolen & Robert Harris

A while back I stumbled on Atalanta and the Arcadian Beast by Jane Yolen & Robert Harris at Half Priced Books and picked it for a couple of bucks.  After having read the Merlin Triology by Yolen I decided it was a good time to check out this Young Hero Series.  I had already read one rendition of the Atalanta story (Quiver by Stephanie Spinner) so I was also interested to see how another YA author approached the story.

You really don’t need to know anything about the myth, however, to enjoy the story.  It really reads like a fast paced adventure story.  Here is the publisher’s teaser:

When her adopted father is slain by a strange beast, Atalanta is determined to take care of herself. She is happy in the forest with only her friend Urso — a giant bear — for company. She wants nothing to do with the world of men.

But the ferocious creature that killed her father is still out there, and Atalanta can’t resist the opportunity to hunt it down, even if that means she has to join forces with a group of hunters to do so. Atalanta must prove that she is as strong and brave as any of the others, as they search together for the deadly Arcadian Beast.

It is an interesting blend of action adventure and subtle explorations of issues like family, gender and identity that are so prevalent in Greek mythology

It turns out there really wasn’t much overlap between the two YA approaches to this legend. Yolen and Harris use a very different perspective. 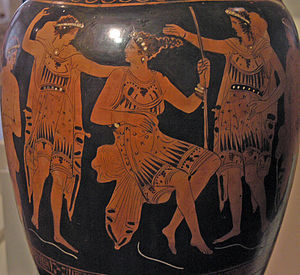 While Spinner used the Calydonian Boar Hunt part of the myth to start the story Yolen and Harris morph the story into the hunt for an “Arcadian Beast” or mantiger that is sort of a combination Chimera and manticore. Spiner also focuses on what happens to Atalanta after she finds out about her royal lineage while Yolen and Harris focus on the events leading up to that revelation.

Yolen and Harris portray Atalanta as a exceptional huntress but also fiercely independent and competitive.  She is perfectly comfortable in the woods – her closest companion is bear – but as a result less adept at social interaction and the niceties of town life; let alone the culture and intrigue of the palace.

So for her the challenge is more than just tracking the beast and getting revenge for her father’s death it is also about learning how to interact with others and to be part of group larger than her immediate family. As the hunt moves from deep in the forest to local town to far away capitol this gets more challenging. And the mystery of her true parents adds an element of suspense and tension.

This quest brings her into contact with not only the hero Orion, the god Pan and the royal family but also in Evenor a family that she can feel apart of. Twice adopted (once by the she-bear and then by her hunter father) she ends up rejecting her blood family – for the time being anyway, the story leaves her eventual return open – and choosing instead what feels like home.

Atalanta can be a prickly and rather proud young women but the story also relates why someone of her skill and background might act this way. As noted, she had little opportunity to sharpen her social skills in the forest where her family and the animals were her only contacts.

But larger Arcadian society also refused to take her seriously as as young women. She is constantly having to prove herself worthy of the hunt.  It is only by saving Evenor’s children that she first win’s acceptance in the town. And it is only by beating Orion in a foot race that she wins the right to be in the hunt. And when events force her to lead the hunt to kill the beast she must once again prove she is up to the challenge even while politics of the royal court and the plots of the gods conspire against the hunt.

Along the way, Pan pops up to chide her and remind her that no matter how much she loves the forest and her bear companion Ursu as a human her fate will in the end be tied to people not animals.  Atalanta accepts this finally but chooses which family to be a part of and in that way stays true to herself.

But all of these are really undercurrents to the story – elements that are part of the underlying myth. Yolen and Harris really just use the characters and elements of the legend to tell a good story. One of a young hero who faces tragedy and but is strong enough and determined enough to rise above it.

Young readers familiar with Greek mythology will enjoy this fast paced read just as much as those with a little more familiarity. And it serves as a good introduction to the building blocks of these classic stories. I plan to check out the other volumes in this Young Heros series.

In the Mail: How to Achieve Heaven on Earth