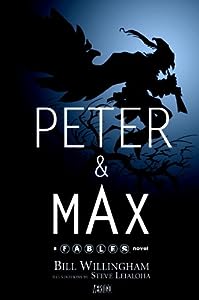 I seem to be back on a fables, myths and legends type kick again (not that I ever got off it). And certainly Bill Willingham‘s Peter & Max fits right in to that theme.

As the subtitle notes (a Fables novel) this book is an outgrowth of Willingham’s popular Fables series of comics:

Fables is a unique series imagining that all of your favorite nursery rhyme, storybook, and fable characters are real and living in New York City.

The characters have all escaped from their own homelands and gathered in a small area of New York. Of course, this is only the human looking characters. All of the animals, Puss in Boots, the Three Little Pigs, Mother Goose, and more, live in an area of upstate New York Known as The Farm.

I have not read any of these comics but the hook was intriguing.  I immediately thought of the Sister’s Grimm series but with an adult perspective rather than YA. Since I love SG I wanted to check out this similar sounding take on fairy tales. The fact that it came with illustrations only added to my interest.

And those expectations were largely met. Peter & Max is a creative and interesting reworking of the Pied Piper story. It left me wondering if this is a one off building on the comics or whether we can expect more novel exploration of Fabletown.

There is always a choice involved in introducing a fantasy adventure of this sort. You either dive right into the adventure and fill in the background and unique facets of the world the characters inhabit as you go along or you try and set up the story first with some explanation right up front.

Willingham goes with the later. And the book starts a little slow as a result. It takes a while to set the scene, understand the concepts and get the characters introduced. But once you get that territory covered it becomes a compelling story.

As can often be the case, the bad guy really steals the show. Willingham flashes back to tell the story of the Pied Piper.  Peter is the younger brother in a traveling musical family. His older brother Max is melancholy bordering on angry. When his father gives the heirloom – and magical – flute to Peter a deep resentment is born.  And when his family (and the Peep family – including Bo – as well) is forced to flee into the heart of the Black Forest Max takes the opportunity to give in to his darker side in a rather gruesome way.

Peter and Max both end up in the town of Hamelin – of rats and children fame – but take very different paths to get there. Willingham alternates chapters telling their stories (as well as the modern day Peter).

Peter, who ends up part of a secret society in Hamelin, is far from the clear cut ethical hero, and his story has some interesting aspects, but Max is the strongest character by far.

He just has this sort of evil charisma that animates the story. He is lazy and ignorant in many ways but has a single minded determination to explore the depths of dark power.  This drive, and the magic flute he is inadvertently given, prove more than enough to give him power beyond what most can imagine. But he keeps a certain sarcastic and almost flippant attitude throughout. He is an incredibly powerful and dangerous person. He is a cruel and narcissistic jerk. But as a character he jumps of the page unlike any of the others.

Peter by contrast seems weighed down by the cares of life. And just when he might be able to put that behind him and start a new life with his wife Bo Peep tragedy strikes in the form of his brother.

The novel starts with Peter seeking to find his long lost brother who is loose on the world again. And the novel ends with their confrontation in this world. But the real heart of the story to my mind is Max’s development into the monster he became and the way Peter is ultimately called to attempt to destroy his brother.

Having read this book and none of the comics I have to wonder if a sequel is planned. In some ways you could see this as just a “novel as introduction” to the comics; hoping the book will convince non-comic readers to cross over.

On the other hand, there are some flaws that would be lessened by a sequel. All of that background and introduction for example would be wasted to some degree if there are no further books. As a stand alone it could have been much tighter in my opinion. You don’t have to explain as much if the only story you are going to tell is Peter & Max.

The sequel of sorts appended to the novel, in comic form, leads me to believe that this is just a stand along offering. The fact that this book takes place prior to the comics and leads into them strengthens that argument I would think.

Even so, Peter & Max is a creative and entertaining twist on the story of the Pied Piper and a nice introduction to the work of Bill Willingham. And Max is one of the better, and more unique, evil characters I have come across. It has a dry wit and manages to mix dark and adult topics with humor and adventure but without going over the top.

Obviously comic fans, and those already familiar with the Fables universe, will want to see what Willingham does in novel form.  But those who enjoy fantasy adventure and stories with myths, fables and legends as background will also enjoy Peter & Max.